Drinking Coffee to Prevent Diabetes. Why Not. (time sensitive offer) 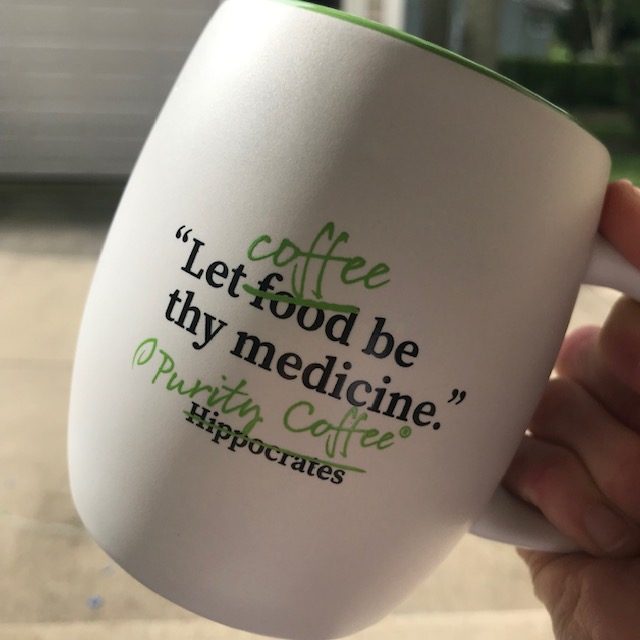 Original post featured years ago on my former site but tweaked for National Coffee Day!! And did I mention there’s FREE coffee involved but the contest ends 9/30/2019 and the major 50% off sale from Purity Coffee ends TONIGHT on 9/29/2019.  And there’s also an Amazon affiliate link. Don’t hate me.

One of the first blog posts I ever wrote was an ode to my Grandmother Jean. She was one heck of a women with a crazy sense of humor, a LOVE of Harlequin romance novels (she could read 3 per day! And read while driving before it was “cool” or illegal too) and could make a mean green, grasshopper pie. Yum! It was not out of the ordinary for her to order her dessert with her meal and take a bite of cherry pie after each mouthful of chicken and stuffing.

But she also had diabetes. It didn’t stop the candy jars from being placed throughout the house that she nibbled from or the 3 Hershey bars she consumed in one sitting, all for the sake of “research.” She gave herself a shot of insulin in her belly for the whole world to see and was done with it. This remarkable women that I long to get one more bear squeeze hug from died too early at 71 from a heart attack. Most likely caused from uncontrolled diabetes.

Did you know 2 out of 3 people with diabetes die from heart disease or a stroke? Ouch!

So when my grandmother’s son, aka my dad decided that day 1 post retirement was pseudomonas for P.A.R.T.Y, I thought for sure the 50 pounds he gained courtesy of half priced happy hours Monday thru Friday was going to lead him straight down Diabetes Lane.

Albeit he reports getting a glimpse of what “old age looks like” and has a gym membership (but I don’t think he uses it..baby steps), routine happy hours are a thing of the past and occasionally jumps on the latest diet fad bad wagon. I’ve given up doing any nutrition counseling on my family so I’m completely fine with that. Heck, the thought of him wanting to be healthier just fills me with joy even if I don’t quite agree with the method.

I’m happy to report much of that weight gain is gone, but still yo-yo’s like many.

The “fat guy” pants have been donated.

One other little tidbit about my dad, he is a COFFEE drinker! And I mean coffee! No “cup” of coffee for him. It was pots! The 12 cup kind and “high-test” as he called it. No need for decaf in this world. From the time I can remember, he’s always had a cup in his hand. When I was tall enough to reach the coffee maker, he’d pay me 25 cents to prep the coffee maker and set the automatic timer to start brewing right before his alarm went off. Hey those quarters added up! Plus I liked it better than the penny a weed I got when landscaping with him. Boring!!

The buzz around coffee’s prevention of diabetes always make my ears perk up (pun intended).

Marilyn Cornelis, PhD nutritionist and assistant professor at Northwestern University Feinberg School of Medicine was quoted in Diabetes Forecast magazine as saying that “coffee has the most potential to prevent type 2 diabetes” and per epidemiological studies “the more coffee the better.”

Say What?!? The more coffee the better?

I can hear my dad now, giggling as he fills up another 30oz Yeti tumbler.

What Dr. Cornelis does go on to say is that the reasoning behind the science is still a mystery. However, it’s pretty certain, caffeine does not play a part.

Caffeine has been shown to actually INCREASE blood sugar levels in some studies. But don’t go a round quoting that. I said SOME studies, not all.

It’s also HIGHLY doubtful that a grande caramel macchiato will also be preventing diabetes. Quite the opposite! 12 teaspoons of added sugar in one drink will stick to your mid section like liquid cheese on nachos. And bigger waist circumferences HAVE been shown to increase your risk of getting diabetes.

Coffee in its natural state ie black, is full of antioxidants and also has several hundred chemical compounds released in the roasting process. And it’s these chemically released properties that Dr. Cornelis believes are protective.

So in the meantime, what’s a gal to do?

No need to avoid it.

Heck even the Internal Medicine doc I work with doesn’t tell his cardiac patients to avoid it anymore (just to keep it less than 4 cups per day).

Have I started drinking coffee at 40 to prevent diabetes?

Not really, but I like to think that the 1 cup I enjoy on the weekends that my husband fixes me with a ½ tsp of sugar and a heavy splash of milk is no longer “a bad habit” I just picked up.

Bottom line, did dad’s lifestyle changes to the “good witch” side of exercise, weight loss and monitoring added sugar intake play a part in preventing diabetes…YES!! Did his coffee consumption also play a role…Maybe!! And that’s good enough for me.

In the meantime, I’ll go grab a bear hug from him.

UPDATE: In the almost 3 years since I wrote this original post, my coffee consumption has increased but still not daily. It’s my treat on my days off mostly because of the awesome birthday present my husband got me which has an uber fancy frother. This one to be exact. I can now make my favorite cappuccino drink for mere pennies.

And while my coffee consumption has gone up, my dads has gone down to almost half of what he typically drank. He still has no need for his fat pants from years gone by and he’s still diabetes free.

The other major change since writing this post years ago, is I’m more in tune with where my food AND my coffee come from. I’m gravitating towards more organic choices, have given up eating meat and dig companies that believe in more than just making a buck. Here’s where Purity Coffee comes in. I’ve been given a wonderful opportunity to work with the Purity brand, get samples to try as well as samples to gift.

Purity Coffee offers a whole bean coffee that smells amazing. It’s free of crap like pesticides, molds and toxins that can come with cheap coffee and tastes smooth. It does give me a little extra jolt than most which I just cut back with a little extra water when brewing. The best part for me though is a happy belly. Unlike other coffees that after one cup having my running to the bathroom or just making my gut feel heavy, Purity does not do this. Honestly I thought this was just a general coffee thing. I never thought it was related to the type of coffee I was drinking.

If you’d like to try Purity Coffee feel free to use my coupon code KLENEGHANRD10 to get 10% off your order. Here’s a direct link to do some fun shopping. And if you do a review for them, you have the option to get this cute coffee mug for free.