Vegan Tacos that will make you say What Meat? 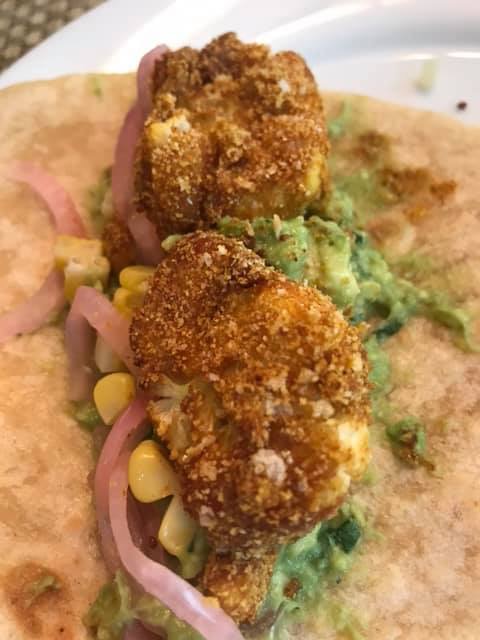 If you don’t follow me in FB land here, you might not realize that I’ve started my own monthly cooking club. Essentially this was a way to reduce therapy prices by upping my friend quota in the most sacred of places: MY Kitchen.

May was Vegan Tacos.

Yes, I know it’s July but Catawba Cooks meets at the end of the month so I’m not that late. Although you’ll want to stay tuned for when I post June’s which was Veggie Burgers; real ones. Not the “impossible” kind. I made one with gobs of Franks Red Hot sauce that brought me back to my hometown roots in Buffalo, NY. But that’s the only hint you’re getting.

Let’s be honest, vegan tacos don’t require a recipe. Just swap out meat for beans, leave off the cheese and sour cream and voila, vegan tacos. HOWEVER, if you want to avoid hearing your family whine about the lack of overly salty cheap meat, start here!

Am I a vegan? No. Have I nixed the meat because I’m the cardiac dietitian at the local hospital and my cholesterol (total and bad) were rising and I felt like a complete hypocrite; yes. Did my levels go back to normal once I gave up the face…YEP!

To make things clear I didn’t entirely give up eating animals with a face. I still consume small amounts of dairy, eggs, seafood and fish. Do I miss meat? Very much so. But I must admit on the rare occasion I snag a piece off of someone’s plate at a restaurant, it doesn’t do much for me. Especially chicken, it now tastes pretty meh.

Oh gee, one more clarification. I’m not snagging off a strangers plate. It’s someone I know. Or at least someone I’m sharing a table with; you know like a friend of a friend. Pinky promise.

Why did I choose Catawba Cooks to be a vegan or plant based cooking club when it could be filled with a larger array of choices?

Bread & Wine by Shauna Niequist, gifted to me by a friend. This was the 2nd book I read by this author; Present Over Perfect being the first. Sometimes books have a way of finding you at the right time you’re suppose to read them. These are those books. Easy beach reading but also thought provoking. Bonus with Bread & Wine because it shares recipes that mean the world to Shauna. It’s like getting invited into her kitchen. (Please note as an Amazon Associate I earn from qualifying purchases)

One of the quotes which I’ll butcher because I won’t even attempt to comb through the book to find it says something in the way of “anyone can make a meal that tastes good with gobs of fat and cream, the trick is making something nourishing for your soul that all your friends can enjoy even the ones with food allergies, intolerance’s or are just crazy.” Ok. I added the last part and her quote was more poetic and probably incorporated a better filter in her thought bubble.

Here’s the thing. My friends are aging. I’m aging. And there’s breast cancer. And rheumatoid arthritis. And depression. And whacky belly issues. And a whole slew of things I’m unaware of.

But I love to LOVE.

And like many people I LOVE to LOVE with FOOD!!

The kind that heals from inside; mind, body and spirit.

And did I mention cocktails? I like those too. So the one we had that evening with our taco fiesta is also included.

Since I didn’t create these vegan taco recipes, I’ve given you the link to the geniuses that did; unless I really doctored it up and made it my own. However, this time around there was minimal changes.

This one CRISPY BREADED CAULIFLOWER from Acouplecooks.com was the BOMB!! This was exactly a taco recipe since it’s just for the cauliflower but we had so many traditional taco accoutrements that everyone seemed to pair it with what they loved. The key to a great taco bar is fresh cilantro; unless you’re a cilantro hater than skip that. Also key fresh lime slices.

My changes; I don’t do coconut oil. I’m an olive oil junky. I think the key here too was that I actually invested in some parchment paper that helped crisp them up. And I love my half sheet pans. If you don’t have one, invest the few bucks like the one here on Amazon that are aluminum free. It’s a game changer in the kitchen department; trust me.

Next up is SPICY MANGO, BLACK BEAN & AVOCADO TACOS by Loveandlemons.com. This one was so simple to put together. While not entirely an vegan taco if you’re doing the cheese and mayo thing, it is a super plant based dish. We served the spicy mayo and cotija cheese on the side for those wishing to add. I had a different kind of Avocado mayo in the fridge but I also have traditional Sir Kensington mayo which has a deeper flavor I enjoy and not made with soybean oil which is also a win. I found mine at Walmart but of course, shocker that Amazon has it too.

The following day since I didn’t use the entire cauliflower to bread (although I wish I had because it was soooo good; albeit I don’t think it would have been great leftovers) was these simple CAULIFLOWER TACOS WITH CHICKPEAS by Wellplated.com. I did not add chipotle chili powder nor did I serve them in taco boats. My canned chickpeas were also not reduced-sodium.

So what did we put these delicious taco fillings in?

I must admit store bought flour and corn tortillas; several different brands. I completely forgot to use my Mikey’s rice tortillas I keep in the freezer. Oops. Those are a good option too. As is lettuce for a taco salad. I’m a hold a taco in my hand kind of girl though.

Our cocktail for vegan tacos night was from one of my favorite go to vegan sites Minimalistbaker.com with her EASY TRADITIONAL RED SANGRIA. Not that Sangria otherwise would contain an animal product…ewwww!

I used a Spanish Tempranillo can’t remember which one but I remember it having a little too much heaviness for this sweeter drink. Oh well, I guess I’ll have to try it again. He he.

That’s a wrap my friends. I’ve hope I’ve inspired you to see beyond ground beef and powdered seasoning packets.

This is real eats.

Don’t forget to stayed tuned for Veggie Burgers!! Or whatever else pops in my head.

PS. Have a plant based or vegan recipe you want me to try at a Catawba Cooks night that you’re too scared to quite tackle yourself first? Send it my way!! My friends know they’re essentially my guinea pigs as well as my therapy.