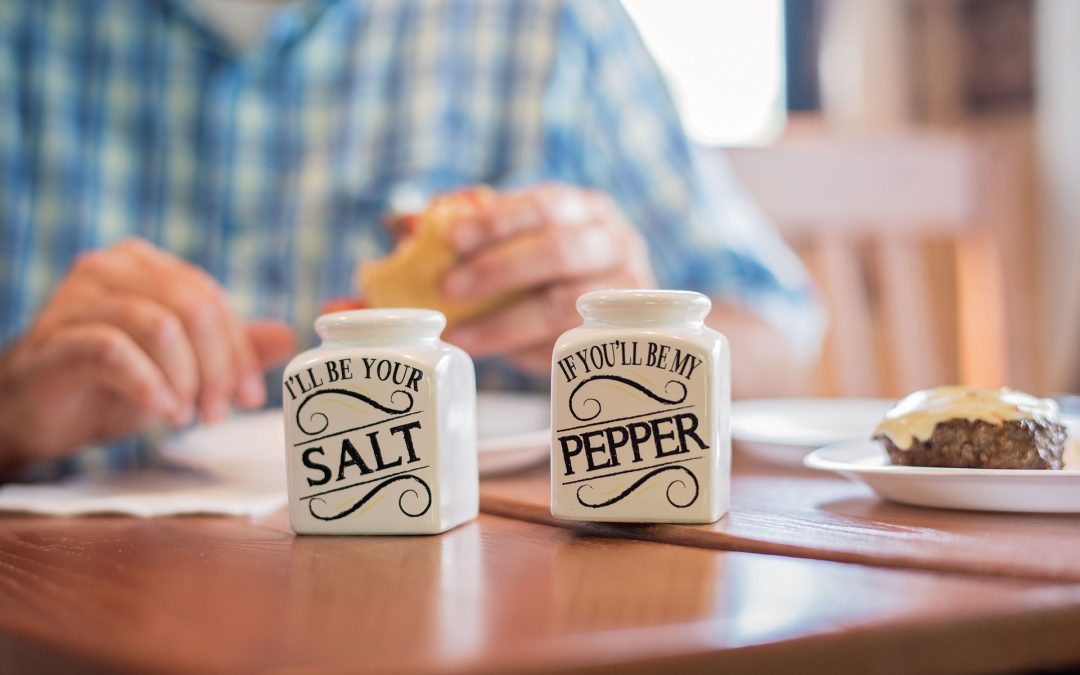 Last week I had the CUTEST patient. She was 86 years old. Lived in Florida full time but needed to dodge Hurricane Irma so her local to me family drove down and brought her back here. Unfortunately during her short stay, she developed CHF (congestive heart failure) and landed herself in the hospital.

Yes, even 86 year olds get my low sodium spiel. Especially if they’re as spry and active as their 66 year old counterparts (or even younger).

After all who feels good when you’re short of breath, weighing more than normal and your shoes are tight because you have sausage feet?

This darling patient assured me she lost her salt shaker years ago. “No seriously honey. I can’t find it and just decided not to replace it.”

I hear this a lot from patients, not necessarily that they “for real” lost their salt shaker but they don’t add salt before they eat something.

But did you know an estimated 10% or less of additional salt you consume comes from the salt shaker?

Most of it comes from the food you eat without thought. And we’re not just talking canned veggies, potato chips and frozen meals.

Here’s a brief list of some common salt licks we enjoy.

When something tells you on the front of the package that it’s REDUCED sodium, why we would actually look at the label to see what it is. It’s LESS. Which automatically means healthier. Right? How does 575mg for 1 TABLESPOON sound?

How many of those little packets do you open up when eating take out sushi? Perhaps this is why I dream of being stuck in the Sahara after a night out eating hibachi.

Oops! I completely forgot to remind you what the recommended sodium guidelines are per the latest 2015 edition of the US Dietary Allowance (USDA). For most, 2400mg Na (sodium) is way sufficient, however, if you have heart disease, high blood pressure, kidney issues are at risk for any other of these (say also have uncontrolled diabetes) than you only are allowed 1500mg Na. And when 1 tablespoon of the real deal soy sauce provides over 900mg, well obviously that ain’t much.

Think you’re doing great eating what seems like the weight loss diet staple of cottage cheese and fruit? Think again. A mere ½ cup provides 450mg and it doesn’t matter whether those cows are shoved into tiny pens or out there roaming the Wild West. In fact most dairy products particularly cheese also provide a heavy dose of salt and fat.. but you knew that. Even a wedge of Laughing Cow Light Swiss has 180mg Na. That’s one wedge!! And let’s fess up, are you really smearing that on salt free crackers?

Did you ever feel like you were on your A Game making homemade chicken fingers for the kids? I have! My favorite recipe was to coat the tenders first in plain yogurt w/ a hint of Dijon mustard then coat the crap out of them with bread crumbs. Then I read the nutrition label. (See even as I dietitian, I don’t read EVERY label!). But I about lost it when I triple read that ¼ cup provided 450mg of sodium!! ¼ cup doesn’t go very far at all, especially in the world of homemade nuggets. And this was for the PLAIN!! I then too was quite offended that there was both high fructose corn syrup AND hydrogenated oils in my should have been simple bread crumb ingredient list.

I have noticed that Panko bread crumbs are free of both HFCS and trans fat (ie hydrogenated oils), however, don’t think that you’re free of checking the rest of the nutrition label. The Private Selection Italian Panko Crumbs with its fancy box take the cake with… drum roll please: 1230mg of sodium for ½ cup (which is more the typical serving size for homemade chicken fingers). OUCH!!!

This is where you have to just look because not all chickens are the same. Whether it’s boneless skinless chicken breast or the staple on a busy night grab and go rotisserie chicken, the sodium levels are going to very significantly. Below is a chicken from Wegmans, by far my favorite grocery store I miss tremendously from my home town. 3oz of this bad boy will set you back 450mg. The BBQ 520mg and the plain 280mg. But are you really going to stick to 3oz?? As Frank the Tank says in Old School “It tastes so good when it touches my lips”. Ok he was referring to beer but still….

Like chicken, not all sauces are the same and label reading is a MUST!. A jar of Classico has 480mg per 1/2 cup (again mere pit-tens of a serving size, at least for me. I LIKE SAUCE!). However when I lived closer, I do recall Trader Joe’s carried a Marinara if I’m not mistaken to have only 35mg. Clearly a HUGE difference. However, I also remember this sauce not tasting all that jazzy. BUT then again adding more oregano, garlic, basil of the fresh or dried kind is sodium free and can go a long way in the happy taste bud category.

I’m curious, do you look at sodium content? What’s been your biggest sodium shocker? Comment on my KimLeneghan facebook page. I’d love to hear from you.

Oh and my cute as a button patient asked me about her Bloody Mary’s. She wasn’t keen on switching it up to a low sodium V8 but decided Manhattans were to be her new favorite cocktail. She got this Dietitians stamp of approval! Small changes at a time.